I can appreciate what I think is the intention* behind the illustration – where there is a very limited amount of information (the figure on the ground), each person’s perspective influences what they see, which in turn influences their opinion.  In this isolated cartoon world, neither can be more correct than the other, and, in fact, the viewer’s perspective of a Hebrew “pey” could be better.  Fine.  I get it.  Or I think* I get it.

But there are three problems here.

Firstly, even in the isolated cartoon world, someone had to draw the figure on the ground.  And that someone had an intention, a purpose, an idea of what they were creating or wanted to communicate.  So, whether we acknowledge it or not, there is an intended perspective from which to view it, and that perspective will alter what is seen, and what is understood.  We cannot assume that our perspective is the intended one, so the only truthful commentary is “From where I’m standing, I think* that the number looks like a six” (or nine, or whatever).

Secondly, and perhaps sadly, we don’t live in the isolated cartoon world (if we did, I’d vote for Calvin’s).  Our perspective exists in a broader context, a world, surroundings, and other people.  The number on the ground was painted for a purpose – perhaps numbering carparks, hopscotch, miles to the finish line.  In any case, our cartoon people could settle the dispute by considering their broader context.  Someone else has already commented on this in the adjusted cartoon below … (and yes, the typo bugs me). 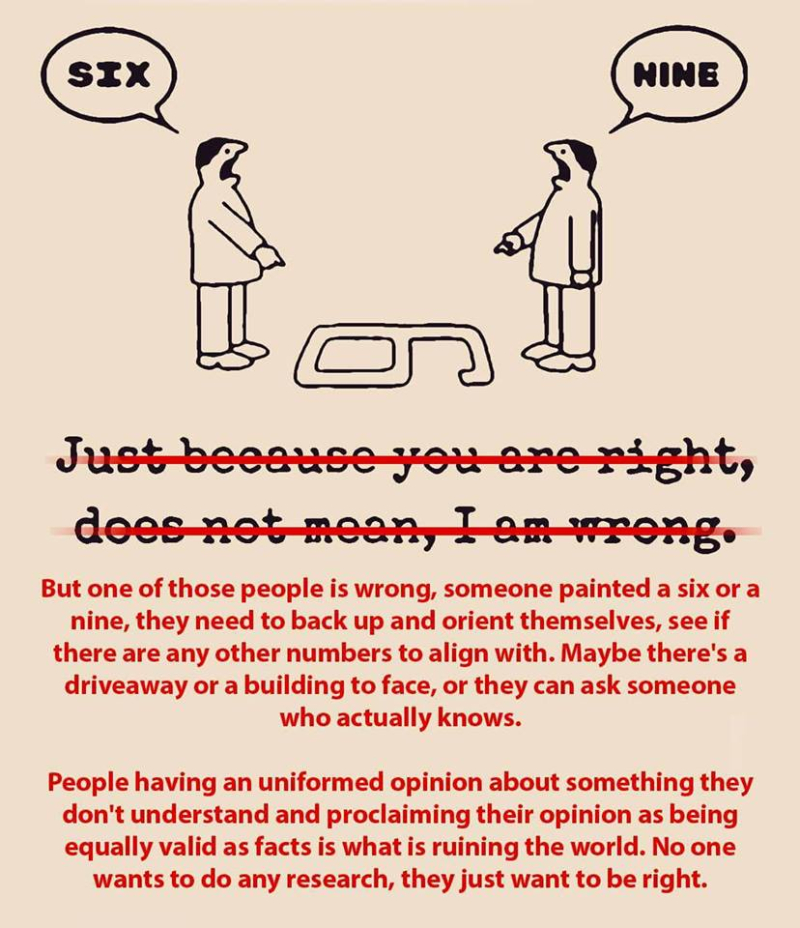 But – typo aside – we should go further than this to Point Number Three.  Which is the point of this post.  Communication is a two-sided business.  A good communicator knows her audience, and tries to shape what is said (or seen, or heard, or whatever) in order that the audience gains a true understanding of what the communicator intended them to understand.  A good communicator knows that the audience’s perspectives will change what they understand, so does her best to inform that perspective with background, context, education.

The trouble is, these days we see communication (as with education) as a consumer commodity.  In other words, if the customer is always right, then that customer – the consumer of the communication, the reader, the listener, or whatever – must be allowed to assume that they have the correct perspective to begin with.  They must be pandered to.  Their perspective – however uninformed (note spelling) – must be allowed to be valid, however much it distorts the writer’s/artist’s/communicator’s intention.

And this is a problem.  The purpose of communication is to communicate, and for this to happen the audience cannot be a consumer or a customer.  They cannot be the expert, they must be the student.  They must be willing to be confronted by something and to be challenged and changed, not choosy.  While some art pieces are deliberately ambiguous and entire careers are built on having opinions about them, many are created with purpose and the closest that those opinions can come to receiving the intended communication is an informed guess.  The artist/writer/composer/communicator remains the expert and everyone else is the student.  While it’s the artist’s/writer’s/composer’s/communicator’s job to do their best to guide the interpretation of the audience, the audience must be willing to be guided.  It’s a two-sided business.

As a bonus fourth point, let’s pick apart the second part of the original cartoon: You just haven’t seen life from my side.  In other words, when the consumer of communication encounters something which challenges them, they assume ignorance on the part of the challenger.  What’s more, they assume ignorance about the perspective of the consumer, not ignorance about context, rationale, or intention of the communicator.  And this is what blows my mind.  The consumer’s perspective and opinion is all-conquering and sacred.  There is an arrogance which assumes a right to be unchallenged, to have any and all opinions respected as absolute truth, and to justifiably defend these opinions with assumptions of ignorance on the part of every other person but themselves.

A couple of years ago, I was walking around Wainamu, the dune-bound lake at Te Henga Bethell’s Beach, west of Auckland.  There are many clear signs regarding the areas where and how dogs are allowed – on-leash, off-leash, and forbidden – as well as detailed maps and information brochures.  We saw a lady walking her dog in an area where dogs were forbidden, so I went and spoke to her, and showed her the brochure I’d picked up.  She said, “I don’t see why dogs wouldn’t be allowed here”, which, of course was probably true.  She didn’t see.  But really what I think* she meant was, “My ignorance gives me the sacred right to hold to any opinion and any action I want, and therefore must be protected at all costs.” Needless to say, she did not want the brochure which explained it.  Her self-proclaimed ignorance was all the right she needed.

But a cold reliance on facts doesn’t help us either.  My mum used to stop by my house every Thursday for breakfast on her way to see the grandkids on the other side of town.  One morning, she arrived upset about something, and ended her explanation by saying, “Those are the facts!”.  She then went into my backyard where the mandarin tree was doing its best to flood the world with fruit, picked a bagful and met me in the car.  The facts of this encounter were:  My mother arrived super-early at my house, ate food from my cupboards, and stole mandarins from my tree.  These facts do not convey the nuance and context of what happened at all.  Beware of arguments who rely on statements like These are the Facts!  They may be factual and true, but they do not adequately represent truth.

While I do think that there needs to be more acknowledgement that perspectives affect interpretation, and likewise that the subtly varying contexts and perspectives therefore give rise to variations in interpretation, I also want it better understood that communication has, more frequently than not, an intention behind it.  In acknowledging that it’s possible that we don’t have the right answer, this does not automatically mean that there is no right answer to be had.

But this is all just my opinion.

PS: For another perspective, and yet another edit on the cartoon, see this writing.