As a teenager I struck gold in the lucky-dip bookstore stakes with a one-dollar haul of brilliance which included Catch-22 (the awesomest, amazingest, bestest and most favouritest book of all time), Rocky, The Godfather, and Finger.  The last one is less well-known than the others, so I will – with a spoiler alert – summarise.  Joseph Finger is employed by a company to ride in ambulances to collect and transport people.  As the story progresses he learns that the people he takes are being killed by the company, and searches for the rationale behind who is taken and why.  After exploring various political and sociological motives, we learn that the company’s core business is simply extracting the constituent chemicals of humans and selling them.  Fun reading, huh?

I found this slightly shocking, as I think it was intended to be.  If we must be distilled into parts thus, we’d prefer to think of ourselves in Carl Sagan’s terms where “the nitrogen in our DNA, the calcium in our teeth, the iron in our blood, the carbon in our apple pies were made in the interiors of collapsing stars. We are made of starstuff.”  The romance of a bit of cosmic significance helps I guess, but we’re still missing something: the most important thing, the essence, the spark, the life.

As living human beings, what are we?  We know our basic building block is the cell.  We know we started from two half-cells called gametes, one from our father and one from our mother, whose combination created a zygote, or the very beginning of what we call me, myself, us.  Time passed, the building blocks of us multiplied millions of billions times over, and here we are now reading this post.  But that’s not all there was to it.

We are not alone.  We are not who we think we are.  We have been colonised.

In our bodies, us, our cells are not only the many-times great-grand-children of that first gamete, but also an enormous and varied collection of alien invaders in the form of bacteria, fungi, viruses and more.  By recent estimates, approximately half the number of cells in us are not human at all.

When we say human, do we mean literally and precisely only those cells which descended from the original us gamete?  Cells with human DNA.  Cells are the blocks from which we’re built, living human beings are a living collection of living human cells.  Simple.

Except, in that case, the human beings which are us can no longer be considered to be living.  Though a few of the alien colonists* cause harm, many are absolutely essential to our own survival.  When they are not functioning properly the effects are huge, ranging from stillborn or premature babies, diabetes, bowel diseases, cancer, HIV, and death.  Yeah, so, um, quite important, really.

*(An aside, I wonder if colon and colony are related? Later research, nope!)

If these alien microbiota are essential to us being alive, are they a part of us?  If without them we would be dead, then maybe we need to say yes … which has consequences.

Humans can survive three minutes without air, three days without water and three weeks without food, so is the air in our lungs a part of the us?  What about the food in our stomach and gut?  The water we drink?  Are people with pacemakers human?  What about those with transplanted organs from other people, or other animals, or grown in the lab?  Are those life-giving interventions a part of their human body or not?

Surely not food and air, I hear you say.  They’re clearly not part of the us.  You breathe in, but you breathe out again.  You eat, but you excrete as well.  Air and food are consumables, fuels, not part of the structure.  True.  Kinda.  But the cells which are demonstrably human – those descended from the original zygote, and having human DNA – are consumed as well.  The turnover rate varies a great deal depending on the type of cell involved, but there are very few human cells which do not experience doing, dying, deletion and subsequent replacement; processes vaguely akin to consuming food or oxygen.

There is a long, long list of ideas we could propose and depose here without much furthering the argument, so let’s skip to the end.  So what?  Why should you care?  What should it matter to you, dear human?

Imagine if we treated all parts of the us in the same way as we treat our own bodies.  No-one who has stubbed their little toe on the corner of the bed in the middle of the night has dismissed it with an airy handwave, saying, “Well, it’s not relevant to me because that pinky is less than 10% of my toes, it’s clearly quite expendable”, or “It just doesn’t make financial or economic sense to address this at the moment.” Nope, I’m guessing there was some hopping, some clutching, at least some level of involuntary comment-making, and very little airy handwaving.  If one part of your body hurts, you know about it.  Your life may not depend on your pinky toe but you care about it.

To be human involves consideration.  The quality and health of the air we breathe, the water we drink, the food we eat are influenced by our own conscious choices.  What if we could see the effect of buying imported strawberries out of season – and their included gas miles – as being as bad for our health as smoking?  What if we realised that taking care of the environment was not something big and far away and optional, but a fundamental part of remaining a living human?  If the bacteria in our gut are part of us, we need to treat them with care and attention, as, after all, our lives do depend on them.  OK, makes sense. We discourage the drinking of Janola.  If the air we breathe is a part of us, we need to treat it well too.  And maybe also spare a thought for – and a chainsaw from – the trees which produce it.  And the same with our water and the clouds and mountains and rivers from which it comes.  And our food.  And … and … and … you get the idea.

Knowing ourselves starts with acknowledgement of the parts of us which have been hitherto unacknowledged and unconsidered.  It involves our responsibility and care and accountability for all of them.  We haven’t even scratched the surface of the what of our constituent parts here, let alone explored the who and how and why of us.

“In our world,” said Eustace, “a star is a huge ball of flaming gas.”
“Even in your world, my son, that is not what a star is, but only what it is made of.” [CS Lewis, The Voyage of the Dawn Treader]

Imagine what we will discover when we explore the rest? 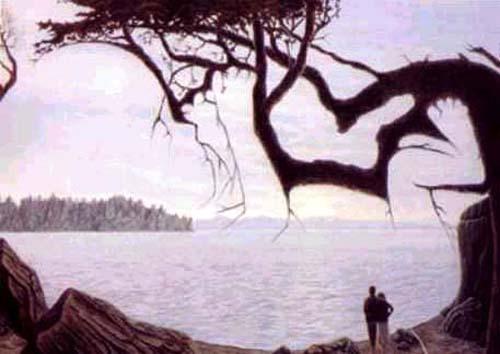 Epilogue:  Some technology companies have started to see the real value of trees to humans, and this would be really encouraging, except that … well, click here.

One thought on “Knowing ourselves: Frogs, snails and star-stuff”